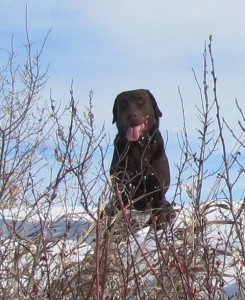 Late one night in November 2010, a local bird dog trainer was out walking his dogs when one of his trainees, a Chocolate Labrador Retriever named Ruger, fell through the ice into the river. The dog was submerged for some time before his trainer was able to find him and pull him from the water; Ruger was limp and unresponsive. Not knowing what else to do the trainer thumped on his chest twice; there was no response the first time however the dog responded the second time by coughing up some water and eventually got to his feet, freezing and in shock. The trainer realized that Ruger was very cold so he made him walk back to the house and then gave him a brisk rubdown to warm him as much as possible, to keep him for going deeper into hypothermia.

Not long after returning home Ruger began to show signs of breathing difficulty. The next morning Ruger was brought to our clinic.

The initial exam showed that Ruger was breathing slightly harder and faster than normal. Radiographs were taken of Ruger’s lungs which revealed changes consistent with inhalation of water. A blood test showed that Ruger was dehydrated and that some inflammation was occuring; we were concerned that this was happening in the lungs. 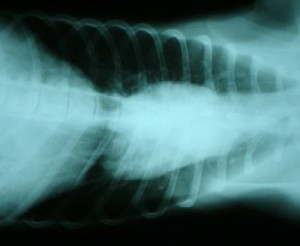 This is an xray of Rugers chest – taken with him lying on his back. Air in the lungs shows up as black areas on radiographs. Rugers left lung (bottom of the picture) has less air in it when compared to the right.

To overcome the dehydration, Ruger was connected to intravenous fluids and kept overnight at the vet clinic. He was also treated for aspiration pneumonia, a condition that occurs when an animal inhales a foreign substance. It results in inflammation of the lung tissue, and is generally treated with anti-inflammatories and an anti-biotic to fight the associated bacterial infection.

The next morning our staff was greeted by a happy, jubilant Ruger. He had been busy during the night chewing out his IV lines after evidently ‘deciding’ the treatment had cured him and he wanted no more of it. After a thorough examination it was decided that Ruger was ready to go back home. His trainer was given instructions to keep Ruger quiet with regular walks on a leash (and well away from water bodies!) To ensure a complete recovery Ruger was prescribed more medication while he was at home and not permitted to go hunting for several weeks.

Now that Ruger has a clean bill of health, you can find him out playing in the fields or nose to the ground tracking birds. 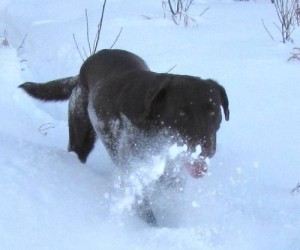