The Nanton Veterinary Clinic was started in 1959 by Dr Frank Baker. For the first few years the practice was principally food animal medicine with procedures entirely conducted on farm. He had a small office in an out- building in yard of his home and the surgery in his basement. In the Fall of 1966 Dr Baker started construction of the first veterinary clinic in Nanton situated at the north end of town along the main highway. That building, completed in 1967, served the Nanton district for 43 years. Dr Baker sold the Nanton Veterinary Clinic to Dr Eldon Hall in 1974 after taking a position as Cattle Extension Veterinarian with the Alberta Government. Dr Hall operated the clinic until 1993 when he sold it to Dr’s de Graaf and Rhodes. The clinic has evolved from a primarily cattle practice where most work was done on farm, to a modern clinic based practice offering a wide range of diagnostic and surgical services. During this time companion animals and horses have become a major part of our practice. In the mid 2000’s it became apparent that more space was needed and a series of plans for renovation and expansion culminated in purchasing land at the other end of Nanton and constructing our present facility which was completed in the summer of 2010. 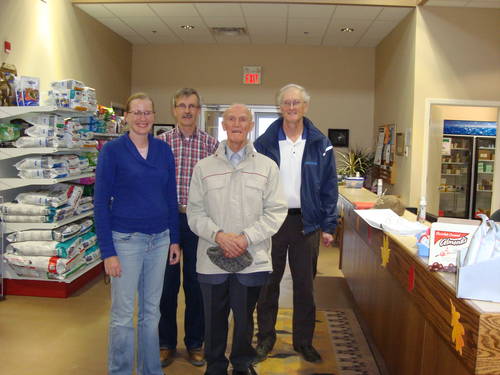